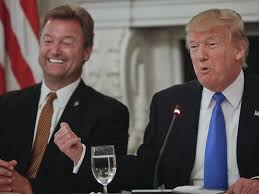 Nevada isn't the laissez-faire, small-government paradise it once was. But it's still enough better than such collectivist hellholes as Chicago and California that people keep fleeing those regimes to flock here, a state with no state income tax, a state where there's plenty of free parking (always excepting government courthouses) and (sometimes with the exception of urban Las Vegas) no one has a problem if you want to cook outside on your charcoal grill, use a plastic straw, smoke just about anything, or wear your sidearm on your hip.

Problem is, once they've been here a few months, those refugees start voting for the same kind of tax-and-regulate crap that turned their previous domiciles into repressive hellholes in the first place. "Restaurant smoking ban," anyone? "No firearms allowed" signs on the public libraries? Teaching "white guilt" and other insidious Marxist nonsense in the government schools? We call it "Californication."

Many folks who hold out hope for Donald Trump as the unlikely yet seemingly heaven-sent agent of a return to Government By the People, for instance, are vowing to "vote straight red ticket" next week, to send the president the kind of reinforcements he needs to keep his agenda on track.