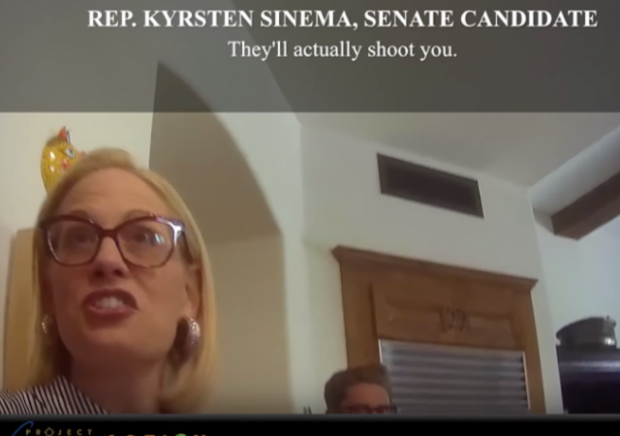 James O'Keefe's Project Veritas is at it again, exposing another Democratic candidate's efforts to conceal their progressive, left-wing beliefs and intentions to capture moderate votes.

After exposing the deceptive nature of Missouri Democratic Sen. Claire McCaskilland her campaign staff, who were concealing their Obamaesque liberal politics in hopes of attracting moderate voters, Project Veritas has done the same with Arizona Democratic Senate candidate Kyrsten Sinema.

Undercover video shows Sinema's campaign staff admitting that "… she is pro-choice. She is very liberal, she's progressive," and that's why, according to campaign manager Michelle Davidson, she can not campaign on an assault weapons ban.

"… I think Kyrsten's approach is so, I think, important. We can't be talking about an assault weapons ban… ," Davidson told Project Veritas' undercover journalist.

Other staffers on Sinema's campaign can be seen admitting that she is more progressive than she lets on, with one staffer saying:

"There's a lot of very conservative people in Arizona and so [Sinema] can't alienate the conservative or moderate conservative voters by being super pro- she is pro-choice. She is very liberal, she's progressive."

We'd like to mention that Project Veritas' undercover investigation into Missouri Democratic Sen. Claire McCaskill could be the reason she is now 2 points behind her opponent, Republican Josh Hawley in the Real Clear Politics poll average. Right as the undercover footage was released on October 16, McCaskill was trailing just under 1% point.

It will remain to be seen if Sinema can survive the expose with the election right around the corner, but we suspect the news will likely kill her chance at bringing those who are only slightly red in the red state of Arizona into the blue.

As of October 30, Sinema is leading in Real Clear Politics poll average by .2%.