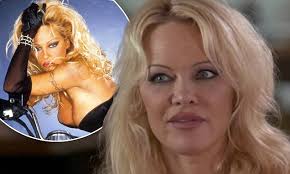 During a segment for 60 Minutes on Sunday night, the iconic Baywatch star labelled the current advocacy of women's rights as a 'bore'.

'I think this feminism can go too far. I'm a feminist, but I think that this third wave of feminism is a bore. I think it paralyses men,' the 51-year-old explained.

Pamela also candidly offered up her thoughts on the Me Too movement.

'I think that this Me Too movement is a bit too much for me. I'm sorry, I'll probably get killed for saying that... but my mother taught me, don't go to a hotel with a stranger,' she confessed.

The '90s sex symbol went on to say that doing Playboy was empowering.

'I think it was very empowering, and no one forced me to do anything,' she said, referring to her time in the famous mansion.

'Everyone was naked in the grotto and the girls were ­downstairs and they all went upstairs,' she told The Sun in March.