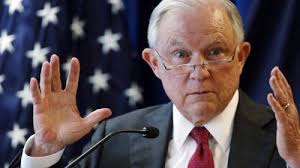 Whitaker also will assume oversight of the ongoing investigation by special counsel Robert Mueller into Russian interference in the 2016 presidential election, and possible collusion by Trump's campaign in that meddling, according to the Justice Department.

Whitaker, who has publicly criticized the Mueller investigation, by law can serve as acting AG for a maximum of 210 days.

He will have the power to fire Mueller "for cause" as outlined under rules governing the special counsel's office, if such cause is found.

Deputy Attorney General Rod Rosenstein up till now has had oversight over the Mueller probe, as a result of Sessions' move to recuse himself from the investigation in 2017.

Sessions, 71, had been repeatedly blasted by Trump for his recusal.

Trump has said that moment opened the door to special counsel Mueller's probe, which the president has repeatedly called a "witch hunt."