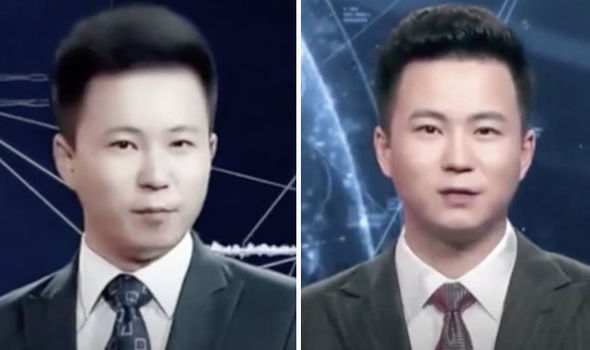 The AI's looks are closely modelled on a real news anchor, and its lips are matched to frame each word that is programmed to come out of its mouth.

The agency jokes that he works 24/7 without taking any overtime.

Xinhua News claims the presenter can "read texts as naturally as a professional news anchor".

In an introductory video, the software says: "I will work tirelessly to keep you informed as texts will be typed into my system uninterrupted.

There is both an English and Chinese-speaking version with different faces.

An artificial intelligence (AI) system has been used to synthesise the presenters' voices, lip movements and expressions. They are based on those of real Xinhua presenters.

The real newsreader is on the left and the artificial intelligence is on the right.

Rather than creating a whole 3D model, the agency has crafted a photorealistic version of the presenters and simply animated their facial features.