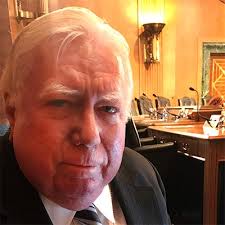 Conservative author Jerome Corsi said Monday that he expects to be indicted by prosecutors working for Special Counsel Robert Mueller on a charge of lying to investigators probing Russian interference in the 2016 campaign.

Corsi, a writer who has promoted political conspiracy theories, provided research during the race to longtime Trump adviser Roger Stone, who Mueller has been scrutinizing for possible ties to WikiLeaks.

On Monday, Corsi told listeners of his daily live-stream web program that he turned over two computers, emails and other communications to Mueller and sat for six interviews totaling more than 40 hours since receiving a subpoena two months ago.

But he said that his cooperation had "exploded" in recent weeks and that Mueller's team has now said he will be criminally charged.

"I'm going to be indicted. That's what we've been told. Everyone should know that," he said.

After two months of interviews, Corsi, 72, said he felt his brain was "mush."

"I anticipate being indicted on a charge of some form of lying," he said. "Trying to explain yourself to these people is impossible …. I guess I couldn't tell the special prosecutor what he wanted to hear."

He added that he believes Mueller's team is persecuting him because of his outspoken opposition to the investigation and defense of President Donald Trump.

"The Department of Justice is run by criminals," Corsi said, adding: "I think my crime really was that I supported Donald Trump. Now I guess I'll go to prison for the rest of my life, because I dared to oppose the Deep State. "

A spokesman for the special counsel's office did not immediately respond to a request for comment.

Corsi did not tell his viewers precisely what he had been told by special counsel prosecutors. His attorney, David Gray, declined to comment.

Corsi is one of at least nine Stone associates who have been interviewed by Mueller's team, which has been investigating whether anyone in Trump's orbit coordinated with WikiLeaks in its release of Democratic emails allegedly hacked by Russian operatives.

Stone made public comments before the 2016 election that suggested he had inside information about material held by WikiLeaks and its founder Julian Assange.

Since the election, Stone has said repeatedly that his comments were exaggerations or came from tips from associates and that he had no knowledge of WikiLeaks's plans.