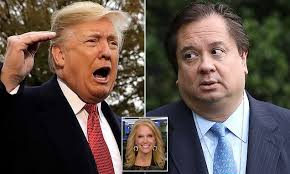 Missing from its mission statement is any mention of Conway's wife, who helmed Trump's White House quest and became the first woman to successfully bring a presidential campaign across a November finish line.

'We believe in the rule of law, the power of truth, the independence of the criminal justice system, the imperative of individual rights and the necessity of civil discourse,' the group says, seeming to spell out a list of what its members see as the president's shortcomings.

'We believe these principles apply regardless of the party or persons in power.'