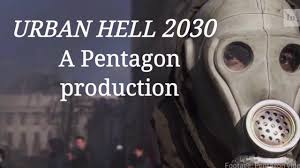 "Megacities are complex systems where people and structures are compressed together in ways that defy both our understanding of city planning and military doctrine," says a disembodied voice. "These are the future breeding grounds, incubators, and launching pads for adversaries and hybrid threats."
The video was used as part of an "Advanced Special Operations Combating Terrorism" course offered at JSOU earlier this year, for a lesson on "The Emerging Terrorism Threat." JSOU is operated by U.S. Special Operations Command, the umbrella organization for America's most elite troops. JSOU describes itself as geared toward preparing special operations forces "to shape the future strategic environment by providing specialized joint professional military education, developing SOF specific undergraduate and graduate level academic programs and by fostering special operations research."

Megacities are, by definition, urban areas with a population of 10 million or more, and they have been a recent source of worry and research for the U.S. military. A 2014 Army report, titled "Megacities and the United States Army," warned that "the Army is currently unprepared. Although the Army has a long history of urban fighting, it has never dealt with an environment so complex and beyond the scope of its resources." A separate Army study published this year bemoans the fact that the "U.S. Army is incapable of operating within the megacity."

Dr. Fauci is No Nostradamus: How COVID-19 Ran Amok Under His Watch