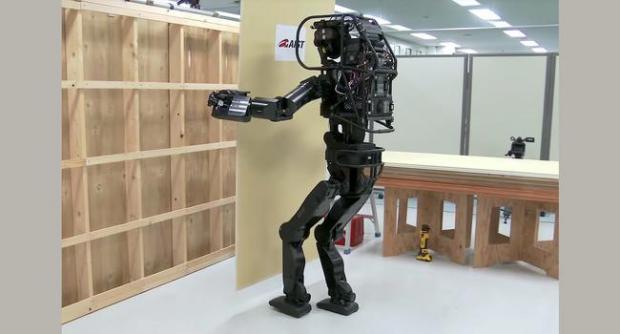 Standing just under 6-feet tall and clocking in at 222 lbs, the HRP-5P has "unsurpassed physical capabilities," according to Phys.org, and is fitted with an array of sensors in order to fully assess its environment to perform various tasks.

In one demonstration, the HRP-5P shows of its skills grabbing standard 77 lb. boards of drywall typically used in construction.

In order to complete the task, the robot must:

Generate a 3-D map of the surrounding environment, detect objects, and approach the workbench.

Lean against the workbench, slide one of the stacked gypsum boards to separate it, and then lift it.

While recognizing the surrounding environment, carry the gypsum board to the wall.

Lower the gypsum board and stand it against the wall.

Using high-precision AR markers, recognize and pick up a tool.

Holding a furring strip to keep HRP-5P itself steady, screw the gypsum board into the wall.

Aside from construction, AIST's robot has compelling applications at aircraft facilities, shipyards or any other environment in which heavy things need to be lifted or manipulated - particularly in hazardous environments.

Fear Is the Mind Killer

The Fed's Faustian Bargain: "We're Experiencing The End-Game Of The Great Debt Super-Cy

Blain: "Don't Be Fooled... April Is Going To Hurt"

Fed's Kashkari Goes Full-On God-Complex, Lectures "This Is Not The Time To Worry About Mora

"This Is The Largest Economic Shock Of Our Lifetimes":

What Happens As State And Local Tax Revenues Crater?

Secrets Behind the Creepy Plague Doctor Mask and Costume