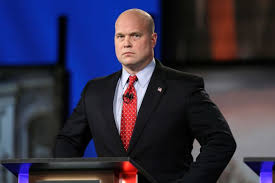 Media elites have gone into full-throated freak-out over the fact that acting Attorney General Matthew Whitaker (shown) supports the right of states to refuse to enact unconstitutional acts of the general government.

In a speech delivered in 2013, Whitaker said of nullification:

As a principle, it has been turned down by the courts and our federal government has not recognized it. Now we need to remember that the states set up the federal government and not vice versa. And so the question is, do we have the political courage in the state of Iowa or some other state to nullify Obamacare and pay the consequences for that?

"The federal government's done a very good job about tying goodies to our compliance with federal programs, whether it's the Department of Education, whether it's Obamacare with its generous Medicare and Medicaid dollars and the like. But do I believe in nullification? I think our founding fathers believed in nullification. There's no doubt about that," he added.

Ignoring the ignorance of CNN, USA Today, and other self-professed "news" outlets, let's analyze AG Whitaker's claims regarding the Constitution.

First, Whitaker asserted that the states "set up the federal government." There is no logical way to dispute that historical fact.

Congress' invitation was sent not to the people, but to the state governments. The state legislatures were invited to send a delegation to help repair rips in the constitutional fabric. This historical fact is irrefutable evidence that a functioning agreement for a government of the United State was the goal. That government, if it was to exist at all, would be the creation of the states that participated in the formation of it.

Additional evidence of the claim that the states were the only interested parties in the compact of the Constitution is found in the way votes were taken and recorded at the convention in Philadelphia. Representatives voted as states, not as individuals. In fact, the journal where those votes were recorded catalogs the yeas and nays according to the name of state, not the name of the delegate.

Another clue to the identity of the parties to the Constitution, is found in Articles V and VII of the document itself.

Article V requires that amendments be "ratified by the legislatures of three-fourths of the states or by conventions in three-fourths thereof." Not only was the Constitution a binding contract among the states, but any alterations of the provisions of that contract had to be signed off by a super majority of the parties.