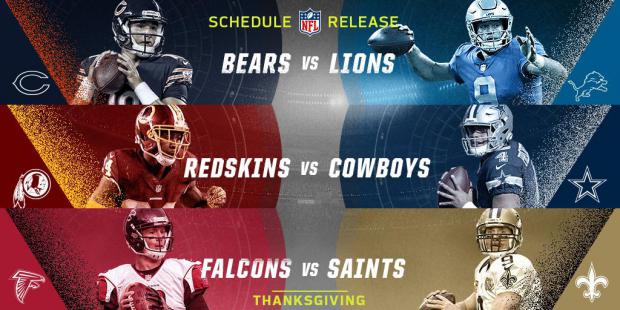 As usual, on Thanksgiving, the 2018 NFL schedule makes us thankful with a trio of fantastic games.

This has turned into a rematch of an ugly game from Week 10 -- the Bears mostly manhandled the Lions before Detroit made a late comeback to pull within 12 points. Matt Nagy has his team in great shape, sitting at 7-3 and in first in the NFC North. Chicago doesn't have a whole lot of room for error if it wants to win the division, making this road trip to Detroit a pretty enormous matchup and they'll be without starting quarterback Mitchell Trubisky as Chase Daniel is likely to start.

The Lions, who are struggling badly this year got a much-needed win against the Panthers to improve to 4-6 and have been impressive on Thanksgiving in recent years, going 4-1 over the last half decade. Chicago needs this game to keep making a run at an NFC wild card as well as the NFC North title.

Enormous implications in this game for the playoffs, as Dallas decided to pull an Undertaker and rise right back up off the mat and into the NFC East and NFC wild card discussion with a victory in Week 10 over the Eagles in Philadelphia and Week 11 in Atlanta. The Cowboys are now 5-5 and just one game behind the Redskins (6-4) in the NFC East after Washington lost a game to Houston and their quarterback, Alex Smith, for the season.

This is a pretty ideal way to shake off a turkey/gravy coma.

Oddly enough, though, it'll be a defensive battle. The Cowboys offense got a nice boost from the addition of Amari Cooper via trade at the deadline, and Ezekiel Elliott was dominant in Week 10 against the Eagles, but it's still Dallas' defense that's been the story so far this year. Rookie linebacker Leighton Vander Esch has been a revelation filling in for Sean Lee and Jaylen Smith continues to be an impact player on the field after taking a redshirt year to recover from a brutal injury.

Washington unquestionably is better on defense, especially now that they're short on the offensive line after injuries ravaged them. It's possible Trent Williams is ready for this game. One thing to watch: Adrian Peterson always runs well against teams he believes slighted him in any sort of way. The Cowboys qualify because he flirted with Jerry Jones publicly when it looked like his run in Minnesota might be up, but Dallas declined to pair him with Zeke.

In their matchup earlier this season, Peterson ran 24 times for 99 yards against Dallas' stout defense. If he crosses the 100-yard threshold in this contest, the Redskins are probably in pretty good shape.

Blood feud here with two gentile Southern teams who do not care for one another. Despite the Falcons falling to 4-6 after two straight losses, this should be a close matchup, because the two teams hate each other that much. The Saints are in the middle of an unbelievable stretch of football being played against an unbelievable stretch of opponents. They won three straight games on the road (Baltimore, Minnesota and Cincinnati) with a dominant win over the Rams stuffed in there as well. And they're coming off a blowout win against the defending champion Eagles in Week 11. Heck of a schedule and New Orleans couldn't care less. Drew Brees is one of the top two MVP candidates right now.

Indigenous Australian Athlete Gets Fined for Criticising the Queen