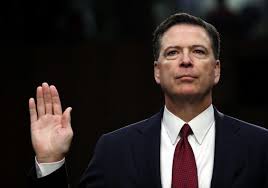 Speaking to the press outside of the proceedings, House Republicans indicated to reporters that they were unhappy with Comey's answers and may attempt to bring him back another day.

After the questioning was underway, some Republicans signaled they were unhappy with Comey's level of cooperation. California Rep. Darrell Issa said Comey had two lawyers in the room, his personal lawyer and a lawyer from the Justice Department. He said the department lawyer repeatedly instructed Comey not to answer "a great many questions that are clearly items at the core of our investigation."

Issa suggested the committee might bring Comey back because he wasn't answering questions. Two other Republicans, Reps. Andy Biggs of Arizona and Mark Meadows of North Carolina, also suggested they might need a second session with Comey if they didn't finish their interview by a late afternoon deadline. -AP

Democrats disagreed, with Rep. Raja Krishnamoorthi (IL) stating "He answered the questions he had to answer," though he also admitted "we got nowhere today."