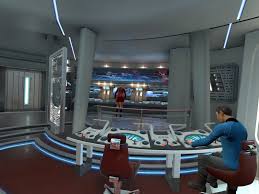 Axanar raised $638000 through Kickstarter to a 90 minute long movie. However, they were stopped by a lawsuit from Paramount and CBS. The lawsuit judgement only allows them to make two 15 minute short films.

The small production is being very efficient at getting the most value for their tiny budget.

Axanar production is bringing the console station of the bridge set to life using $5 Raspberry Pi computers. The scrappy production bought computers for $5 each on Black Friday special. The computers play video animations onto LED monitors.

This is part of the process of making a functional original series bridge. They use thirty-five $5 computers and a few more higher-end systems.

This bridge is made by professional set designers with a low budget will look real without any post-production effects.

Not Enough Power is a Real Life Problem

They were concerned with power-consumption of their bridge. They did not want to overload the electrical system at their studio. They are using LED lights, LED monitors and low-power Raspberry Pis.