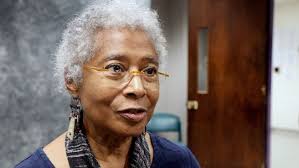 Anyone who has read Alice Walker's The Color Purple knows that it is not a pleasant book to read. It is filled with violence and child sexual abuse and rape. "Harpo come up the steps from the car. My wife beat up, my woman rape, he say. I ought to go back out there with guns, maybe set fire to the place, burn the crackers up."[1]

The Color Purple was made into a movie by the same name. It was directed by none other than Steven Spielberg. Spielberg was obviously more than willing to take the role as director because The Color Purple is essentially an attack on the black family and Logos of history. We all know that Spielberg is known to distort the facts of history, as in the case of his movie Amistad.

We must also keep in mind that the Khazarian Mafia worked very hard to turn blacks into complete revolutionaries. This was truly the case with Frederick Douglas and Lorraine Hansberry. In fact, Lorraine Hansberry (A Raisin in the Sun), John Wideman (Brothers and Keepers), and Alice Walker all married Jews.[2]