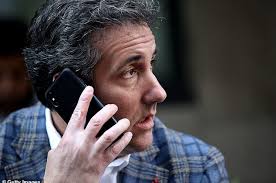 A mobile phone traced to President Donald Trump's former lawyer and "fixer" Michael Cohen briefly sent signals ricocheting off cell towers in the Prague area in late summer 2016, at the height of the presidential campaign, leaving an electronic record to support claims that Cohen met secretly there with Russian officials, four people with knowledge of the matter say.

During the same period of late August or early September, electronic eavesdropping by an Eastern European intelligence agency picked up a conversation among Russians, one of whom remarked that Cohen was in Prague, two people familiar with the incident said.

The phone and surveillance data, which have not previously been disclosed, lend new credence to a key part of a former British spy's dossier of Kremlin intelligence describing purported coordination between Trump's campaign and Russia's election meddling operation.

The dossier, which Trump has dismissed as "a pile of garbage," said Cohen and one or more Kremlin officials huddled in or around the Czech capital to plot ways to limit discovery of the close "liaison" between the Trump campaign and Russia.

The new information regarding the recovery of Cohen's cell phone location doesn't explain why he was apparently there or who he was meeting with, if anyone. But it adds to evidence that Cohen was in or near Prague around the time of the supposed meeting.

Both of the newly surfaced foreign electronic intelligence intercepts were shared with Special Counsel Robert Mueller, people familiar with the matter said. Mueller is investigating Russia's 2016 election interference and whether Trump's campaign colluded in the scheme. Mueller also is examining whether Trump has obstructed the sweeping inquiry.