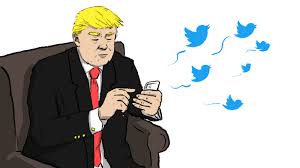 President Donald Trump wished the country a happy new year in a Twitter video with a self-pitying reminder that he'll be ringing in 2019 at the White House instead of at a lavish Mar-a-Lago ball with Melania as was previously planned.

'While I'm at the White House working you're out there partying tonight, but I don't blame you,' Trump said in the 11-second video.

'Enjoy yourselves, we're going to have a great year. Have a really, really happy new year.'

Trump followed that tweet up with a string of posts about the border wall – which is the reason he's spent the holidays alone.

The president cancelled his trip to Mar-a-Lago amid the government shutdown that began December 21 when Democrats refused to put the $5billion Trump wants to fund the wall into the Congressional budget.

As midnight approached on Monday night, Trump called in to Fox News' All-American New Year special for an interview with contributor Pete Hegseth.

'I'm sitting in the White House right now. I'm talking to you,' Trump said when asked what his plans were for the night.

He quickly changed the subject and said: 'We need border security. Everybody knows it. We need a lot of people approved that we can't get through the senate. We have 360 people. They want to join the administration. The ambassadors and lawyers and lots of other people. We cannot get them approved. Because I could you could call it obstruction if you think about it it it. It is pure obstruction.