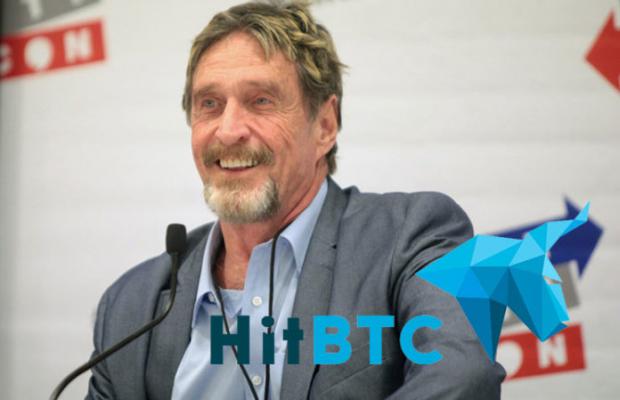 In a highly unethical and suspicious move, it has recently come to light that cryptocurrency exchange HitBTC has been freezing withdrawals for many of its customer accounts just hours before the launch of the much awaited annual proof of keys event.

To add fuel to the fire, this was one of the top crypto exchanges facing scrutiny for its actions from of of the most vocal crypto asset advocates, John McAfee, who called on investors and traders to boycott the trading platform in the middle of 2018. And given the recent news of what HitBTC has done to its users, he had this comment to add into the mix:

I warned everyonw more than a dozen times. Don't sign up. Don't use it. Withdtaw your funds. I was trashed for calling out HitBT as a corrupt cimpany. Tough shit. You had six months warning from me to withdraw your funds. Do not ask me to help you now.

Elaborating further on the matter, it is worth noting that a couple of days back (on the 31st of December, 2018), the trading platform suspended the accounts of one of its daily users (by the name of PEDXS). According to a post on Reddit, PEDXS claims that he had duly completed all of the KYC tests that were required of him. However, despite this, HitBTC repeatedly denied his request to withdraw his altcoin holdings from his account.

In relation to the matter, PEDXS was quoted as saying:

"After months of sending 40 plus emails, HitBTC finally un-froze my account," PEDXS said in his complaint. "I immediately withdrew most of my funds but left a small amount to day trade. I did that because HITBTC promised that "No further automated restrictions will be applied."

More on the Matter

Much like the above stated issue, over the course of the past 48 hours, many other HitBTC customers too have come forth and shared similar experiences. For example, another user who goes by the alias 'LOOKATMYIQ', also took to Reddit recently when he too faced 'withdrawal rejections' from the exchange.

"Submitted all my documents/evidence for KYC days ago and now support [is] going cold on me. Have I been scammed? I have been trading crypto for years on all kind of exchanges and never had my funds locked without warning like this. Support [was] fast to respond when asking for additional (over the top) information but since I have given them everything they have asked for they've just disappeared on me."

What Should We Make of All This?

According to many market analysts and crypto experts, these intentional roadblocks could be part of HitBTC's plans to stop massive coin withdrawals during the upcoming Proof of Keys event.