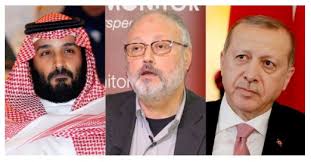 After 55 days covering the Jamal Khashoggi Case, 24 X 7, on the ground, in Turkey, with over 600 reports and analyses, via my pinned thread @sibeledmonds on Twitter (due to not having access to my computers and being equipped only with one cell phone), I am ready to conclude and publicize my investigative report.

The Khashoggi Case is a massive PsyOp concocted by MI6, CIA and Mossad, with the cooperation and participation of certain high-level Saudi Government intelligence officers.

For the first 53 days of my investigation of this case, while posting reports and analyses via Twitter posts on an almost hourly-basis, I had refrained from a definitive conclusion, partly to protect my sources, but also due to fulfilling the requirement of having documents and at least two direct named (and vetted/legitimate sources).

Yesterday I broke the news on the bombshell revelations by Former Director of the Turkish Military Intelligence Services, General Ismail Hakki Pekin, via Oda TV Live Coverage on Nov 21. See the 6-min video clip below