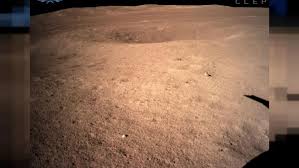 The Chang'e-4 lunar probe, launched in December, made the "soft landing" at 0226 GMT and transmitted the first-ever "close range" image of the far side of the moon, the China National Space Administration said.

The moon is tidally locked to Earth, rotating at the same rate as it orbits our planet, so most of the far side - or "dark side" - is never visible to us. Previous spacecraft have seen the far side, but none has landed on it.

The landing "lifted the mysterious veil" of the far side of the moon and "opened a new chapter in human lunar exploration", the agency said in a statement on its website, which included a wide-angle colour picture of a crater from the moon's surface.

The probe, which has a lander and a rover, touched down at a targeted area near the moon's south pole in the Von Karman Crater after entering the moon's orbit in mid-December.