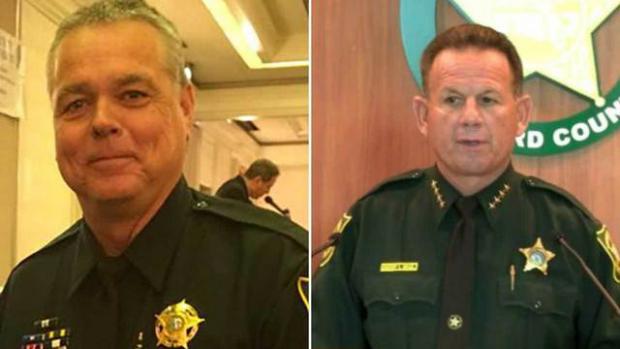 Parents of children gunned down in the Parkland school shooting in Florida last year have never understood two actions taken by Broward County Sheriff Scott Israel: his refusal to fire a campus-based deputy who failed to enter the school during the rampage that took 17 lives, and his continued defense of controversial Obama-era school policies that allowed the ?accused shooter, Nikolas Cruz, to avoid arrest and a police record and thereby purchase the murder weapon. Sheriff Scott Israel, above at a hearing, is suspected of favoring Scot Peterson, top photo, a deputy on the scene who did not confront the Parkland killer. Some say this is because of the deputy's leniency in 2014 toward the sheriff's son, a school quarterback accused of sexual assault.

Some now think they have found the answer in a single incident that occurred in 2014. A police report shows that's when Israel's then-17-year-old son, Brett, was accused of participating in a sexual assault of a 14-year-old boy at Marjory Stoneman Douglas ?High School.

The case was investigated by Scot Peterson -- the armed deputy who took cover while children and staff were shot last February. Using the Obama-era guidelines, Peterson's recommendation helped his boss's son receive just a three-day suspension.

According to the four-page report filed by Peterson, the victim, who was a freshman at the time, alleged that Israel, then the school's starting quarterback, held him? down while another senior kicked him, grabbed his genitals and rammed a ?baseball bat between his buttocks, simulating rape.

People familiar with the case say Peterson could have referred Israel for felony charges, but reduced the crime to "simple ?battery," making him eligible for a leniency program requiring no arrest. "The school district's disciplinary matrix requires no law? enforcement action required regarding the incident," the deputy wrote.

"A child was sexually assaulted and Peterson reduced the charges to fit a matrix and report it as information. This allowed the? deputy to put it away and not do anything," said Arreaza, who is suing both Israel and Peterson on behalf of Anthony Borges, a ?Stoneman Douglas student who survived the massacre, despite being shot five times.

Arreaza said that the same lax disciplinary culture meant Cruz was never expelled or sent to the juvenile justice system despite committing ?multiple offenses every year throughout middle and high school. Peterson was warned at least twice of the threat Cruz posed? as an active shooter,? but failed to investigate the matter. Peterson had an office on the Stoneman Douglas campus, where he'd been posted for nine years. Security video shows deputy Scot Peterson, right, outside Marjory Stoneman Douglas High School during the Feb. 14 massacre.

Though armed with a handgun, Peterson failed to go into the building to confront the shooter when he opened fire last Feb. 14. He? took position behind two concrete walls outside the building and never fired a shot, even though the suspect stopped five times to reload.? With a single AR-15 semi-automatic rifle reloaded from a vest he wore that held 30-round magazines, Cruz allegedly managed to fire more than 140 rounds inside the building, slaughtering 17, including both students and? teachers, and wounding another 17, including Borges.

While Israel publicly criticized Peterson for inaction during the shooting, he didn't fire his deputy, instead letting him resign and? receive a public pension of almost $105,000 a year (not including health-care benefits). The 55-year-old Peterson will collect? monthly payments of more than $8,700 for the rest of his life.

Arreaza suspects that Israel protected Peterson because the deputy protected his son from prosecution, adding that Israel tried to keep? the four-year-old incident report under tight wraps. After the report was leaked to him, Arreaza said that "a BSO [Broward Sheriff's Office]?attorney called me to try to scare me into not doing anything with it." RealClearInvestigations has obtained a full, unredacted? copy of the report, but is withholding the name of the victim.

More than 70 US Capitol cops have quit since January 6 riots and deadly April attack...