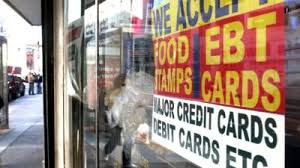 If people are getting this restless already, what will things look like when tens of millions of Americans are suddenly cut off from their primary source of food money?

Well, as Daisy Luther reports from her Organic Prepper blo g, it's starting early. As we discussed previously, we weren't expecting to see a loss of food stamp benefits until the end of January, but a grocery store in Indiana reported they are unable to process EBT payments.

In Clay City, Indiana, the local IGA discovered the problem last week. Initially, they thought it was a technical glitch.

"Our machines weren't taking any EBT cards and we didn't really know what was going on. We didn't know if it was a technical issue. And then we found out it was due to the government shutting down," Tristen Malone said. (source)

And although it's for a slightly different reason, The Red Lion store in York County, Pennsylvania has also had issues. New owners recently purchased the grocery store and sent in their application to accept government benefits before the shutdown occurred.