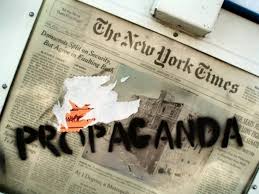 The trio of authors, apparently self-tortured victims of the Trump Derangement Syndrome, actually had the gall to print a story in the once and former Gray Lady of journalistic rectitude which was nothing more than an ugly smear on the sitting President of the United States – one that would have done Joe McCarthy proud:

The inquiry carried explosive implications. Counterintelligence investigators had to consider whether the president's own actions constituted a possible threat to national security. Agents also sought to determine whether Mr. Trump was knowingly working for Russia or had unwittingly fallen under Moscow's influence.

It doesn't get lower than that. The only thing that they didn't mention was presidential Treason, but it's hard to say that "working in behalf of Russia against American interests" would constitute anything less.

So exactly what did the trio of wet behind the ears nincompoops at the New York Times – Adam Goldman, Michael Schmidt and Nicholas Fandos – dig up from the diarrhetic bowels of the FBI that warranted the above characterization?

Why, it is apparently the following, which is surely a red hot smoking gun. That is, one that condemns the FBI, not Trump; and shows that the NYT, which once courageously published the Pentagon Papers and had earned the above sobriquet for its journalistic stateliness, sense of responsibility and possession of high virtue, has degenerated into a War Party shill – not to say the journalistic equivalent of a comfort woman:

Mr. Trump had caught the attention of FBI counterintelligence agents when he called on Russia during a campaign news conference in July 2016 to hack into the emails of his opponent, Hillary Clinton. Mr. Trump had refused to criticize Russia on the campaign trail, praising President Vladimir V. Putin. And investigators had watched with alarm as the Republican Party softened its convention platform on the Ukraine crisis in a way that seemed to benefit Russia.

Well, for crying out loud!