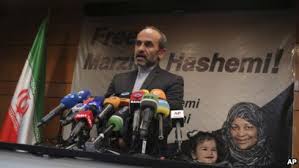 DUBAI (Reuters) - Iran on Wednesday called for the immediate release of an American-born journalist arrested in the United States while working for Iran's English-language state television, accusing Washington of mistreating her in jail as a black Muslim woman.

Iran's English-language Press TV said earlier Wednesday that Marziyeh Hashemi, its TV anchor and documentary film maker, was arrested at St. Louis Lambert International Airport on Sunday and was being held in Washington. She has not been formally charged.

Federal Bureau of Investigation officials were not immediately available for comment.

"We condemn the illegal arrest of Marziyeh Hashemi, the reporter and presenter of Press TV, and the inhuman treatment of her in jail in Washington," Iranian foreign ministry spokesman Bahram Qasemi was quoted as saying by state news agency IRNA.

Iranian Foreign Minister Mohammad Javad Zarif also said that the arrest was "unacceptable" and called on Washington to end "this political game".