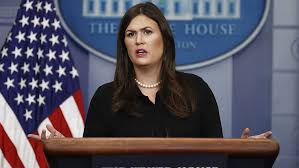 Following an earlier tweet where he condemned the mainstream media outlets for bashing a teenager at a Catholic high school in Kentucky who was accused of harassing a Native American activist after video footage of the encounter was taken wildly out of context, Trump revealed that he told Press Secretary Sarah Sanders "not to bother" with press conferences because of the unfair and "rude" media coverage she receives.

The reason Sarah Sanders does not go to the "podium" much anymore is that the press covers her so rudely & inaccurately, in particular certain members of the press. I told her not to bother, the word gets out anyway! Most will never cover us fairly & hence, the term, Fake News!

Since almost the beginning of the Trump Administration, the mainstream press has consistently griped that the supposedly "daily" White House press briefings now only happen once in a blue moon. According to an analysis by Quartz, which cited data from the American Presidency Project, in 2018, Sanders "held drastically fewer briefings than her peers, allowed relatively few questions, and engaged in many contentious exchanges."