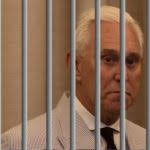 According to media reports, Amy Berman Jackson, the same judge who presided in the case brought against Manafort in Washington, will be the judge overseeing Stone's case.

As we mentioned earlier, Stone will make is first appearance in her courtroom at 11 am ET.

Update 2: A source from within the FBI has confirmed that the unidentified Trump administration official cited in the Stone indictment is former White House Chief Strategist (and Trump campaign manager) Steve Bannon.

Steve Bannon is the "high-ranking campaign official" referenced in the discussion of October emails in the 24-page indictment released today by Special Counsel Robert Mueller, according to a person familiar with the matter.

The other two unnamed individuals in the indictment - Person 1 and Person 2 - are widely believed to be Jerome Corsi and Randy Credico.

Update: Though nobody is saying the president did anything wrong with regards to Friday's indictment of Roger Stone (notably, the indictment didn't allude to any interactions between Stone and the president) Press Secretary Sarah Huckabee Sanders on Friday felt it appropriate to remind the media that the president "did nothing wrong" regarding the Stone indictment.

Stone worked for dozens of Republicans, Sanders said, and the charges in the indictment have "nothing to do" with the president, she said during an interview on CNN.

Asked if Trump directed the campaign official to contact Stone about the stolen emails released by Wikileaks, Sanders refused to speculate. She also said she wasn't aware of any heads up given by the DOJ to the White House about Stone's arrest (though clearly the DOJ felt comfortable giving CNN advanced notice).