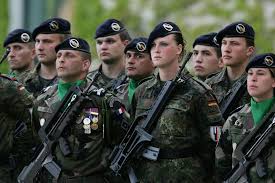 "Converging this much with Germany is an abandonment of sovereignty — a betrayal. If we had not alerted the public, this text would have been signed on the sly. The text provides in particular for the need to legislate in the event of obstacles to Franco-German cooperation.... I do not want more convergence with Berlin, be it in social or security matters, or in closer consultation in the UN Security Council." – Marine Le Pen, Le Temps.

"Emmanuel Macron is calling for a grand debate to involve citizens in the public life of our country. At the same time, however, the President of the Republic negotiated a treaty on the sly even though it concerns conditions essential to the exercise of our national sovereignty. Neither the French people, nor the Parliament, nor the Constitutional Council were consulted... For many reasons, this treaty undermines our national sovereignty." – Nicolas Dupont-Aignan, leader of the party Debout La France! (Stand Up, France!).

French President Emmanuel Macron and German Chancellor Angela Merkel have signed a new Franco-German friendship treaty aimed at reinvigorating the European Union, which has been buffeted by the European debt crisis, mass migration and Brexit — as well as innumerable conflicting interests and priorities among its 28 member states.