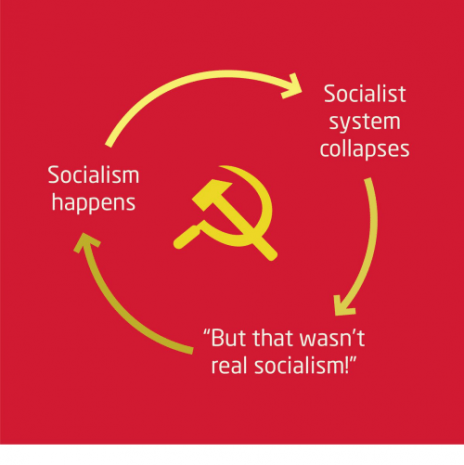 It's a familiar scene. A socialist and a critic of socialism are engaged in heated debate. The critic invariably raises what the socialist considers a hackneyed and lazy objection: "Well what about what happened in the Soviet Union? Or in Maoist China? Those were socialist states. Are you really endorsing such systems? Don't they prove that socialism doesn't work?"

The socialist scoffs, shakes his head dismissively, and rehearses his own correspondingly hackneyed reply:

No. Those weren't really socialist states. They were socialist in name only. In fact, they were just co-opted by corrupt forces from within or compromised by destabilizing environmental and/or economic conditions, or pre-empted by reactionary forces from without… or some combination of the three.

What happens next is usually that the debate descends into irreconcilable disagreements about what really happened in Russia in the 1920s, empirical claims and counter-claims that are virtually impossible to verify on the spot one way or the other, and, eventually, the debate ends at an impasse. Both parties return to their ideological priors and walk away convinced that their own position has not been refuted and that the opponent's position remains thoroughly provisional and unconvincing.