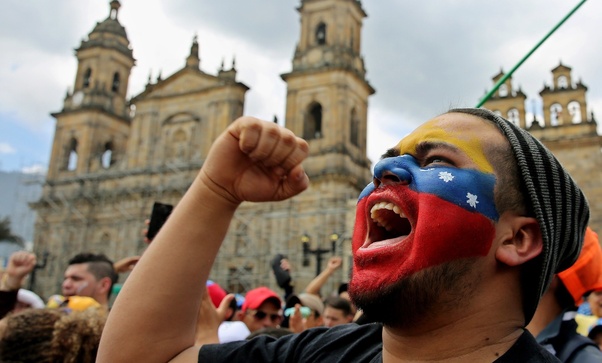 US thus openly backs regime change. But what has long been a dream of the neocons may well turn out to be a nightmare for President Trump.

Why did Trump declare that the Venezuelan president was no longer the president? According to the State Department, the Administration was acting to help enforce the Venezuelan constitution. If only they were so eager to enforce our own Constitution!

It's ironic that a president who has spent the first two years in office fighting charges that a foreign country meddled in the US elections would turn around and not only meddle in foreign elections but actually demand the right to name a foreign country's president! How would we react if the Chinese and Russians decided that President Trump was not upholding the US Constitution and recognized Speaker Nancy Pelosi as US president instead?

Even those who would like to see a change of government in Venezuela should reject any notion that the change must be "helped" by the United States. According to press reports, Vice President Mike Pence was so involved in internal Venezuelan affairs that he actually urged Guaido to name himself president and promised US support. This is not only foolish, it is very dangerous. A Venezuelan civil war would result in mass death and even more economic misery!

Regime change has long been US policy for Venezuela. The US has been conducting economic warfare practically since Maduro's predecessor, Hugo Chavez, was first elected in 1998. The goal of US sanctions and other economic measures against Venezuela (and other countries in Washington's crosshairs) is to make life so miserable for average citizens that they rise up and overthrow their leaders. But of course once they do so they must replace those leaders with someone approved by Washington. Remember after the "Arab Spring" in Egypt when the people did rise up and overthrow their leader, but they then elected the "wrong" candidate. The army moved in and deposed the elected president and replaced him with a Washington-approved politician. Then-Secretary of State John Kerry called it "restoring democracy."

It is tragically comical that President Trump has named convicted criminal Elliot Abrams as his point person to "restore democracy" in Venezuela. Abrams played a key role in the Iran-Contra affair and went on to be one of the chief architects of the disastrous US invasion of Iraq in 2003. His role in helping promote the horrible violence in Latin America in the 1980s should disqualify him from ever holding public office again.

Instead of this ham-fisted coup d'etat, a better policy for Venezuela these past 20 years would have been engagement and trade. If we truly believe in the superiority of a free market system we must also believe that we can only lead by example, not by forcing our system on others.

Just four months ago President Trump said at the UN: "I honor the right of every nation in this room to pursue its own customs, beliefs, and traditions. The United States will not tell you how to live or work or worship. We only ask that you honor our sovereignty in return." Sadly it seems that these were merely empty words. We know from Iraq, Libya, Syria, etc. that this will not end well for President Trump. Or for the United States. We must leave Venezuela alone!