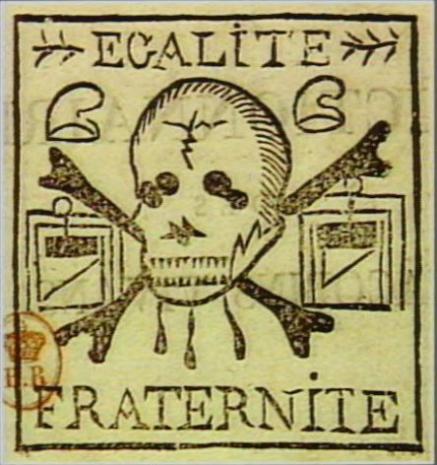 It's significant that Karl Marx was inspired by the French Revolution to form his concept of a utopian society. He envisioned a worldwide revolution in which all people everywhere would do away with the rich and everyone would then be equal. He felt that this could be achieved by peaceful means in England and America, but would require force in Germany and Russia, and a "temporary" dictatorship by the proletariat in order to create the ideal society. The utopia, he said, would from then on be self-sustaining.

As we now know, his utopia was a bit naïve, as revolutionary leaders, once exposed to the heady thrill of achieving power, are extremely reluctant to then give it up. They tend to become far more autocratic and ruthless than their predecessors and, rejecting socialist abnegation for themselves, ultimately become the next aristocracy.

It's a pity that Mr. Marx didn't see this coming. It was certainly evident during the French revolution, as is seen in the contemporary banner above, with its prominently featured skull and crossbones. (In case the observer didn't get the point, the artist further accentuated his composition with the addition of two guillotines.)