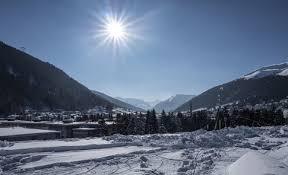 Conversation was dominated not only by who was there, but by who was not. Numerous political leaders stayed at home. One investor argued we are seeing the biggest political and policy uncertainty since the 1970s.

Behind the scenes, I found three big themes with special relevance to finance.

1. How worried should we be about artificial intelligence?

Artificial intelligence (AI) has replaced blockchain as the big conversation for executives, second only to US-China trade. There were 11 public sessions on AI, the most of any topic. Eighty-five percent of chief executives thought that AI and machine learning from huge data sets would dramatically change their business over the next five years, according to a PwC report. But when asked if AI will displace more jobs than it creates, CEOs sat on the fence: 49% think yes, 41% no and 10% don't know.

Whether China was on track to surpass the US in AI development was also a big debate. Blackstone CEO Steve Schwarzman and AI Superpowers author Kai-Fu Lee both thought it likely.

Highly-Educated Americans Are By Far The Most Closed-Minded; Gallup

New CDC Estimates: Fatality Rate For COVID-19 Drops Again And May Surprise You