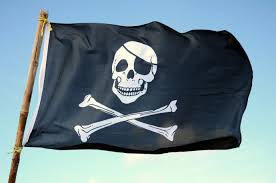 If entrepreneurs are looking to bring more socially conscious policies to their companies, they may just want to try to "be more pirate," author Sam Conniff Allende recently told Yahoo Finance's "On the Move."

While many of us may have grown up watching the roguish, Captain Jack Sparrow in the "Pirates of the Caribbean" series, Allende said many people don't realize that pirates implemented "very dynamic and innovative organizational structures."

Instead of having a stratified pay system like that of today, in which CEOs earn roughly 300 times more than average employees, pirates had a more equitable structure in place, Allende said.

"Pirates were the millennials of the 18th century, average age 28. And they were escaping this really stratified and quite brutal system," Allende said. "The Royal Navy was the biggest employer in the UK, certainly, at the time and then the Merchant Navy."

Much like many millennials challenging the status quo in the workplace today, Allende said pirates denounced unfair pay in the shipping industry.

"After the 2008-2009 financial collapse, one of the key recommendations was about checking the disproportionate rate at which CEO salaries were going up, because it helped build this volatility," he said. "The pirates had this down. There was an upper and lower threshold."

Allende pointed to historical documents that show that the captain and the doctor on board the pirate ship only made about "two to three times" what the other pirates were making.

"There was transparency all across. There was no gender pay gap with pirates. In fact, there was fair pay across ethnicity, and diversity, and gender," Allende said. "There were all sorts of innovations taking place. [It was] the first time we saw workplace compensation. If you were to lose a leg on board our ship, that'll be 800 pieces of eight for you, 600 pieces of eight for an arm, and a 850 for an eye."

Allende explained that ultimately the pirate system — albeit illegal — was a "form of democracy that hadn't been seen in the world at that point," including as checks and balances.

"To have an accountable set of leaders, who were responsive to the team's demand, knowing that any moment they could be deposed by the team, made them more representative and fully democratic than even Athenian democracy, which we point to for like the pure form of democracy, because really then it was only the white blokes who had the vote. And that was only a third of society."

'Nature does this every so often, it wipes us out':

With two governors banning Chloroquine, it is perfectly clear that -

Is Controlling the Switch

As a Christian, Should You Fear the Coronavirus? ESSAY

Decadent like the late Roman Empire, the West is committing suicide-

Three Critically-important - and Suppressed - Articles that our Governors, the Media and the Public

Mark Cuban To Chuck Schumer; 'DO YOUR F**KING JOB!'

Leaving People Alone Is the Best Way to Beat the Coronavirus

Blain: This Crisis Isn't About The Wuhan Flu... It's Much More