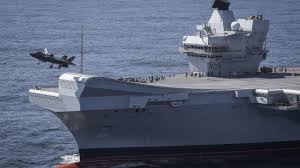 Perhaps out of humiliation over the ongoing spectacular tragicomedy that is Brexit, and in desperate need of a distraction from her domestic political troubles, Theresa May has taken a page out of the the US neocon playbook, and has decided to send Britain's new aircraft carrier to China's backyard in what The Times has dubbed "a show of strength" - just in case Beijing is unclear how to respond to this hilarious development - because apparently the UK believes it is a US stunt-double when it comes to sending Beijing messages about its territorial ambitions in the South China Sea.

May's defense secretary, Gavin Williamson, will say today that "Britain must be ready to use hard power" to protect its interests, The Times reported, although it wasn't clear just what interests the UK has just off the Chinese coastline. Williamson will warn that Russia and China are blurring the boundaries between peace and war and declare that Britain must stand up to those who "flout international law", a principle that "may lead to us intervene ourselves."

"To talk but fail to act risks our nation being seen as little more than a paper tiger," he will say, seemingly unaware of how the world currently views Brexit ground zero.