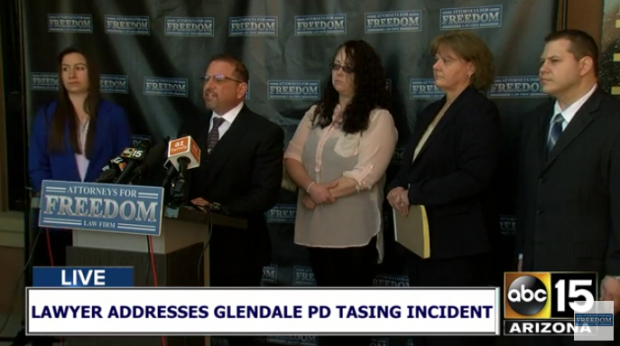 **** FOR IMMEDIATE RELEASE **** THE ATTORNEYS FOR FREEDOM LAW FIRM ANNOUNCES THAT WE REPRESENT JOHNNY WHEATCROFT, HIS WIFE AND THEIR MINOR CHILDREN

The Attorneys For Freedom Law Firm announces that we represent Johnny Wheatcroft, his wife, and their minor children with respect to the incident that occurred on July 27, 2017, regarding the Glendale Police Department's use of excessive force resulting in a violation of Mr. Wheatcroft's civil rights.

Mr. Wheatcroft was then wrongfully charged with Aggravated Assault against the Glendale Police Officer. He was then wrongfully detained in the Maricopa County jail for approximately two months before the criminal charges against him were dismissed. Mr. Wheatcroft, his wife, and his children remain traumatized by this event. Our law firm has filed suit in Federal District Court and the case is expected to go to trial. We are honored to seek justice on their behalf. Related video links

The Comedy Genius of CNN

'MILITARY WILL HAVE NO ROLE IN TRANSITION': EX-TRUMP NATIONAL SECURITY ADVISER