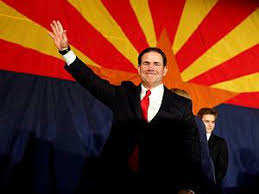 Someone who's trained as a nurse in California doesn't magically forget those skills when they cross the border into Arizona. The same is true for plumbers, electricians, makeup artists, and pretty much any person working in any other licensed profession—and Arizona might soon be the first state to stop pretending otherwise.

A bill introduced Monday in the Arizona General Assembly would allow anyone with an occupational license from a different state to automatically qualify for the same license in Arizona without having to retake classes and pass tests again—though they would have to pay a fee to the state board that administers the license, and would have to demonstrate that they were in good standing with the licensing authorities in their previous state. So-called "universal licensing recognition" would make it easier for licensed workers to move to Arizona and would do away with time-consuming and expensive requirements for license-holders who want to move across state lines.

In short, it makes a lot of sense. And it makes particular sense for Arizona, a growing state that expects to gain more than 100,000 residents this year.

"If you've been licensed to work in another state and want to move here, let it be known: Arizona will not stand in your way," Gov. Doug Ducey said during his State of the State address last week. Ducey, a Republican, called for the state legislature to pass the bill quickly. "As people move here, we want them to be able to work from day one," he said.

The bill will have its first hearing in front of the state House Regulatory Affairs Committee this afternoon.

Arizona already recognizes licenses from beyond its own borders for military families, and the new bill would extend that same privilege to other workers.

"This helps workers across the country who want to move to better their lives and helps Arizona businesses by allowing them to recruit licensed/certified workers nationwide," says Paul Avelar, an Arizona-based attorney with the Institute for Justice, which is advocating for the reform.

As it stands, most licenses aren't transferable between states, and research in recent years has shown a link between growing levels of occupational licensing—more than one-third of all jobs in the United States is now subject to some form of licensing, up from just one in 10 jobs in 1970—and a decline in workers' mobility.

Nationwide, workers whose jobs require a state-issued license lose out on between $178 million and $711 million they could have earned by moving to a different state, according to a 2017 paper by Janna Johnson and Morris Kleiner, a pair of labor economists at the University of Minnesota. Johnson and Kleiner examined 22 professions that are licensed across most states, and found that workers in those professions were, on average, 36 percent less likely to move across state lines than workers in non-licensed professions.

"For example, a licensed public schoolteacher with a decade of teaching experience in New Hampshire is not legally allowed to teach in an Illinois public school without completing significant new coursework and apprenticeships," they wrote. "The existence of such requirements could constitute a significant cost to migration across state lines for those in licensed occupations, and these costs could prevent individuals from moving if the costs of re-licensure had been lower."

Small Kingman, AZ Activist Group Is Successfully Pushing Back Against the Unconstitutional...

Shop Owner STANDS UP To Tyranny In Sedona! - This Video Will Be BANNED

They are sending people door to door to test people for COVID-19 antibodies in Phoenix, Arizona