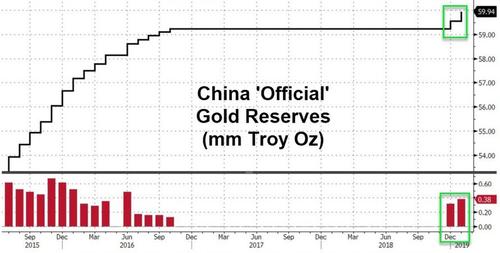 China is also trying "to diversify its reserves" away from the greenback, according to Jeffrey Halley, senior market analyst at currency broker OANDA. The analyst told the South China Morning Post that the state of affairs in global politics, including a trade war with the US, are driving China's interest to buy gold as a "safe haven hedge."

In January, China dropped to sixth place among the world's largest holders of the yellow metal behind Russia. With its 67.6 million ounces of gold, Russia now stands in fifth place behind the US, Germany, France, and Italy.

Crucially, the size of the gold addition are far less important than the signaling effect - why did China decide now was the right time to publicly admit its gold reserves are rising?

After months of seeming stability in the yuan relative to gold, Q4 2018/Q1 2019 saw China seemingly allow gold to appreciate relative to the yuan