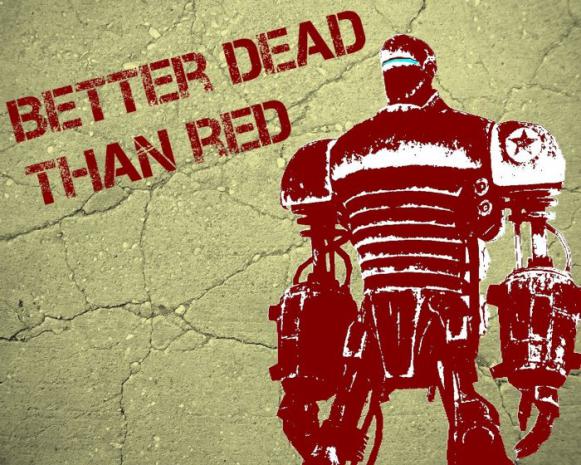 "There is a word very commonly used these days: "anti-communism." It's a very stupid word, badly put together. It makes it appear as though communism were something original, something basic, something fundamental. Therefore, it is taken as the point of departure, and anti-communism is defined in relation to communism. Here is why I say that this word was poorly selected, that it was put together by people who do not understand etymology: the primary, the eternal concept is humanity. And communism is anti-humanity. Whoever says "anti-communism" is saying, in effect, anti-anti-humanity. A poor construction. So we should say: that which is against communism is for humanity. Not to accept, to reject this inhuman Communist ideology is simply to be a human being. It isn't being a member of a party."

Publisher's Note: My youngest son rotates out of his Okinawan tour with the USMC in August, I look forward to him coming home to be closer to his parents at a western posting to finish out his enlistment. The Corps is an existential train wreck in so many ways that I will explicate once he has safely concluded his four-year enlistment. Right now, he has no intention of reenlisting, thank the Gods.

He is one of the most talented shooters I know, and the Corps has done nothing with that wealth of genetic skill and knowledge.

I just started ProfCJ's epic multi-part series on the "not so civil war" starting at episode #131 in his DHP podcast series. I mentioned before I started at episode #53 to enjoy my commutes to the day-job. I am an amateur military historian and he has really rounded out my knowledge base and expanded the power critique to areas I had not investigated.

In other news: "Why are anti-gun activists so violent?" When you turn that question around and ask it the other way (why are the government supremacists so opposed to private humans being armed?) then it pretty well answers itself.

Don't let the communists seize the high ground on language; if gun violence is responsible for two thirds of all suicides, is it rope violence if they hang themselves? There is no communist country in recorded history that permitted private weapons ownership. I say again, you will note that the disarmament enthusiasts NEVER advocate the disarming of government forces. It is not even in their "moral" imagination.

The title of this essay is quoted from the widow of Vaclav Benda, Kamila. Her husband was a jailed dissident in communist Czechoslovakia. The courage of Benda in defying his government is so much more profound than the faux outrage and cost-free virtue signaling of the present generations of outraged harpies and impassioned soy-bois who man the fainting couches. Keep in mind that the present RESIST! army in America is a plea to not reduce the size and scope of government but the opposite. These new communists want the largest government in the history of humankind to get even larger and deadlier.

That is their fatal conceit because they know what's best for you.

"Because we knew Mordor was real. We felt that their story" — the hobbits and others resisting Mordor — "was our story too."

"Kamila talked about how she once received a letter from Vaclav from prison. In it, he wrote of the possibility that they would emigrate in exchange for early release.

"I wrote back to tell him no, that he would be better off staying in prison to fight for what we believe is true," she told me.

Think of it: this woman was raising six kids all alone because her husband was a political prisoner. Yet she told him that the cause they served was more important than the relief of their suffering."

The kids told about how their parents vaccinated them against the disease of communist ideology by raising them to know that the things they heard at school and in the media were lies. In other words, Vaclav and Kamila were consciously counter-cultural, and understood that they had to impart the same sense to their children, to keep from losing their children to propaganda.