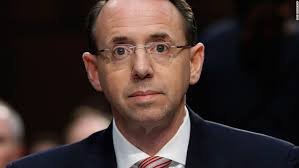 US Deputy Attorney General Rod Rosenstein is expected to step down in mid-March, according to Reuters, citing a Justice Department official.

Rosenstein - who has refused to testify in front of Congress since reports emerged that he wanted to secretly record President Trump and invoke the 25th Amendment to remove Trump from office, had been expected to leave his position shortly after newly minted Attorney General William Barr assumed his office.

The DOJ official said Rosenstein's departure was not connected to the 25th Amendment or surveillance allegations.

According to a September New York Times report and renewed allegations by former acting FBI Director Andrew McCabe, Rosenstein considered wearing a wire in meetings with Trump - an accusation that the Deputy AG has called "inaccurate and factually incorrect."

Earlier on Monday Trump accused both McCabe and Rosenstein of planning a "very illegal act," which he described in a tweet as "illegal and treasonous."

Barr now has oversight of the investigation. -Reuters