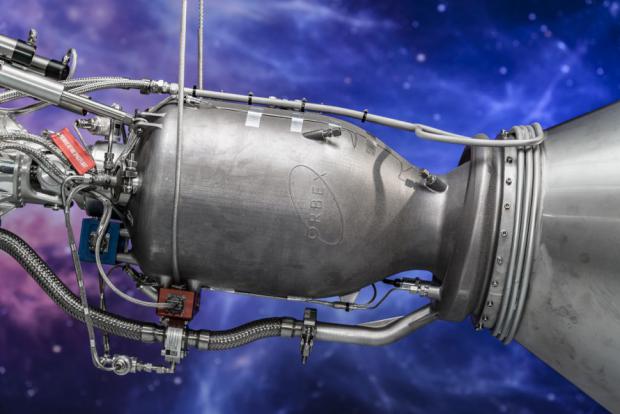 FORRES, SCOTLAND — Orbex, a United Kingdom-based rocket startup, just unveiled part of its new Prime small-satellite launcher, which the company hopes will be lofting spacecraft into low-Earth orbit from the north of Scotland at a rate of one a month by the mid-2020s.

At a Feb. 7 event here at Orbex's base, company representatives showed off the completed engineering prototype of the two-stage Prime's upper stage, which is made of lightweight carbon fiber and aluminum composites and features the world's largest 3D-printed rocket engine.

"The use of biopropane gives us some really unique options," Orbex Chief Technology Officer Jonas B. Bjarnø, who previously worked on a plethora of high-profile international missions including NASA's Juno Jupiter probe, told Space.com during the Feb. 7 event, which also marked the opening of Orbex' Forres factory.

"Biopropane stays liquid even at low temperatures and has the ability to densify," Bjarnø said. "When you cool it from the ambient temperature to the same temperature of liquid oxygen, which we use as an oxidizer, its density increases by about 30 percent. That enables the vehicle to carry more fuel in the same volume."

Prime as a whole will be up to 30 percent lighter and 20 percent more fuel-efficient than other small-satellite launchers currently in development, Orbex representatives said

He said the first stage will be designed to land in the sea but declined to elaborate on the technical specifics, saying the technology is currently patent-pending.

Orbex aims to launch Prime for the first time in late 2021, from the Sutherland spaceport in northern Scotland. British satellite maker Surrey Satellite Technology Ltd (SSTL) will provide an experimental payload for the first flight. Orbex is also considering launching from Norway or the Azores, an island chain in the mid-Atlantic, as a backup plan.

He said he expects European small-satellite makers to be keen on the opportunity to launch from Scotland instead of having to transport their spacecraft to Kazakhstan or India.