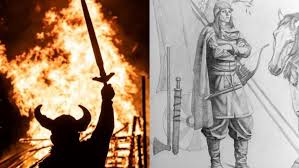 The 10th-century grave, known as Bj. 581, was first discovered on the Swedish island of Bjorko in the late 19th century. Stunning artifacts found in the grave indicated that it belonged to a high-status Viking warrior, who, for over a century, was assumed to be male.

In 2017, however, experts published the results of a DNA analysis that revealed the skeleton was female. The amazing discovery garnered a great deal of attention and sparked plenty of debate.

In a study published this week in the journal Antiquity, the researchers responded to critics of the original study, explaining that they analyzed the correct skeleton and that there was only one set of human remains in the grave. "The simple and secure conclusion is that we have the right individual, who was buried alone, and that this person has been proven to be biologically female," they explained.

The experts also reiterated the woman's warrior status. "In our opinion, Bj.581 was the grave of a woman who lived as a professional warrior and was buried in a martial environment as an individual of rank," they wrote. "To those who do take issue, however, we suggest that it is not supportable to react only now, when the individual has been shown to be female, without explaining why neither the warrior interpretations nor any supposed source-critical factors were a problem when the person in Bj.581 was believed to be male."