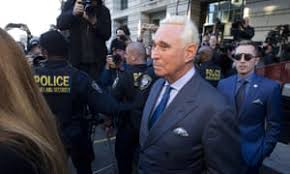 U.S. District Judge Amy Berman Jackson hauled Stone into court for posting an image on Instagram that depicted her with a rifle crosshair near her head.

In a written order, Jackson forbade Stone from speaking about his case through 'radio broadcasts; interviews on television, on the radio, with print reporters, or on internet based media; press releases or press conferences; blogs or letters to the editor; and posts on Facebook, Twitter, Instagram, or any other form of social media.'

The judge also prohibited him from talking about Special Counsel Robert Mueller's larger Russia investigation, and blocked him from using 'surrogates, family members, spokespersons, representatives, or volunteers' to speak publicly on his behalf.

In a packed Washington, D.C. courtroom hours earlier, Jackson delivered a stern lecture to the man who once had the president's ear and whose political career stretches back to the Richard Nixon administration.