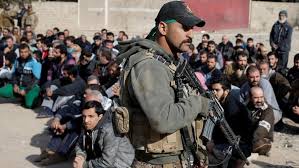 Otherwise, Trump will "release them" without specifying where and in which country. The US President is no longer ready to spend time waiting "for others (EU countries) to do their job".

This is what the US establishment's foreign policy and relationship with allies are all about. The US asked European, Canadian, Australian and Middle Eastern countries to send troops to Syria to "fight ISIS". But before that, some years ago, the US asked European countries to allow potential jihadists to travel to Syria and Iraq, and for Saudi Arabia and Jordan to open their prisons and pardon core jihadists in order to reach their favorite destination, the Levant, to destroy the Syrian state and create a "failed state" scenario.

But their wishes did not come true and President Bashar al-Assad didn't fall in 3 to 6 months as predicted in 2011. Today the world is facing a new puzzle: what should be done with those the West helped reach Syria in order to terrorize, rape, and murder the people of Syria, who now want to return to their countries of origin? It is obvious the US establishment is unwilling to help Europe deal with their human refuse who joined ISIS at America's request.

Up to now thousands of ISIS members have managed to return to Europe and much more to their Middle Eastern, Asian and African countries of origin. These are fighters, few formerly incarcerated in their countries of origin, who answered the call and reached Syria and Iraq with the help of western and allied intelligence services to wage jihad and join the Caliphate of an "Islamic State".