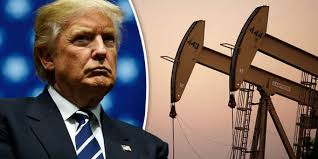 After months of radio silence, Trump the oil analyst has returned to complain about prices being too damn high.

For the first time since OPEC+ agreed to cut production at its December meeting, Trump has chimed in on Twitter to tell the cartel to "relax and take it easy" because oil prices are "getting too high."

OPEC and members of an ancillary group led by Russia have been cutting production since the start of the year after striking an agreement during OPEC's December meeting in Vienna to lower output by an aggregate by 1.2 million b/d during the first six months of 2019.

More recently, when Trump has tweeted about oil, he has been cheering the advances in US shale production that led the US to become a net exporter for the first time.

But with retail sales and home sales slumping and the Fed warning that Q4 GDP - due out Friday -  might disappoint, Trump probably reckons that now would be a good time for a de facto "tax cut" - the kind that wouldn't blow out the deficit even further.

Oil prices tumbled after the tweet, notching one of their biggest daily retreats since the beginning of 2019, virtually ensuring that this won't be the last we hear from Trump on this subject.