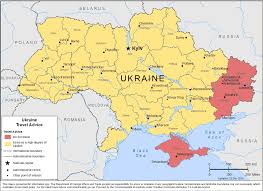 While many are concerned with possible flare-ups in places like Syria, Israel, or the South China Sea, another area where there is the distinct potential for a third world war has always been and still remains to be Ukraine.

While the Western media rarely reports on Ukraine except to remind its readers and viewers that Russia "illegally annexed" Crimea and destabilized democratic Ukraine, the fact is that the area is a powder keg that could bring about direct clashes between Russia and the US or NATO.

Although Syria still retains much of the spotlight in the Western press, Ukraine happens to be yet another repeat of the NATO method of using color revolutions and proxy fighters to destroy a central government in order to replace that government with a puppet of their own choosing.

Russian resistance, however, has confounded those plans at least in the east of the country and what has taken place subsequently has resulted in a  proxy war between Russia and the United States. To make matters worse, that proxy war is taking place on Russia's border, making the situation that much more dangerous for the rest of the world.

Western media's incredibly frightening hysteria and fear-mongering over "Russian meddling," "Russian spying," "Russian military involvement" and pretty much anything Russian whatsoever are occasionally highlighted by distorted claims pretending to show that Russia is acting aggressively or has ever acted aggressively in Ukraine.

For Western mainstream media and for Western governments, Russia's actions in Crimea and Ukraine are nothing more than another example of Russian aggression that is growing worldwide. Virtually the entire Western world is engaging in neo-McCarthyism, this time moving full speed ahead without even the benefit of having at least some credible evidence to back up its case.

Thus, when Russia seized a number of Ukrainian sailors and military ships in the Sea of Azov, the Western media was alight with claims of Russian aggression. Ukranian President Petro Poroshenko declared martial law and called on the rest of the world to support Ukraine militarily. Donald Trump subsequently canceled a planned meeting with Vladmir Putin citing his concerns over the Russian action against Ukrainian forces.

But the story of Russia and Ukraine is much more than the recent incident in the Sea of Azov and it is much different than the way in which Western media has presented it. Given the fact that the Russians and Americans are so close to coming to blows in Ukraine, it is incredibly important to understand the facts surrounding the crisis, not merely the propaganda coming out of the mouths of politicians and major corporations.

Before we take a look at the Sea of Azov incident, we must first correctly orient ourselves to the backstory that brought us to this point.

Defend America, Not Ukraine: Treat Kiev as a Friend Rather Than an Ally

NATO's Colonization of Ukraine Under Guise of Partnership

Ukrainian MP Found Dead With Gunshot Wound To The Head