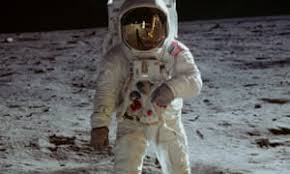 The documentary Apollo 11 starts, as the famous mission did, in Cape Canaveral, Florida. Trucks ferry massive rocket props, machinery grinds as it would in any construction zone, the sky is a crystal blue. The scene is, in a word, vibrant – so startlingly alive that for the first few minutes, I wasn't sure if I was watching footage from 1969 or a Nasa promo shot from last year.

That present-ness is one of the film's major feats, credit due to director Todd Douglas Miller, who has found a brilliant way to portray the first moon landing by doing nothing more than the gargantuan task of faithfully rejuvenating the historical record. The documentary is seamless curation of archival work; Miller and his team, in partnership with Nasa and the National Archives, sifted through 11,000 hours of uncatalogued audio and restored reams of original film, including hyper-detail 70mm footage that languished in the archives, boxed up and forgotten, since 1969.