You can now ride along with Virgin Galactic at the edge of space. An incredible new video shows footage from the SpaceShipTwo-class suborbital rocket VSS Unity launching from its carrier aircraft, WhiteKnightTwo.

With a mountain range below, Unity lights up its engines. A few frames later, the spacecraft soars into a black sky, the curve of the Earth underneath it. Unity clocked a peak altitude of 55.87 miles (89.9 kilometers), which is slightly above the U.S. Air Force's defined boundary of space — the second time a Virgin Galactic spacecraft has surpassed that boundary.

In the video Unity slowly rotates against the black backdrop of space, displaying black-outlined diagrams of several airplanes and space planes along its hull.

"Welcome to space," one of the two pilots says. In addition to pilots Dave Mackay and Michael "Sooch' Masucci, a third Virgin Galactic staff member, Beth Moses, was also on board. Moses is the company's chief astronaut instructor and served as the company's first test passenger.

"Welcome to the club, astronauts," says one of the ground controllers.

Part of the flight's purpose was to provide more data about how the human body adapts to space during SpaceShipTwo flights, and how passengers feel. Unity also carried four NASA payloads, with the aim of studying data such as dust particles, payload vibration and liquid/gas interactions. 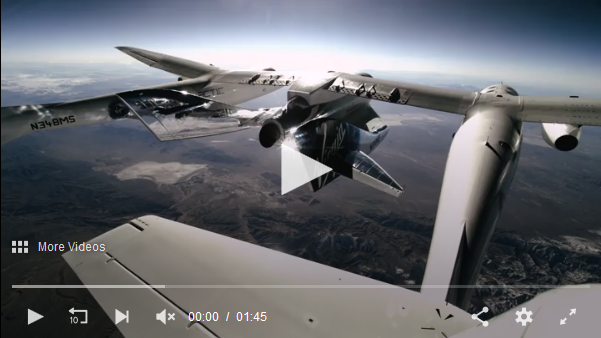