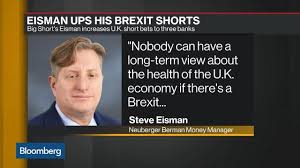 "I'm shorting two stocks in the U.K., but I've got a screen of about 50, and I might short all 50 if I think Jeremy Corbyn is going to be prime minister," Eisman said. "Corbyn's a Trotskyite. Now I know my Trotskyites well and I know you don't want to be invested in the U.K. if a Trotskyite is prime minister."

While Eisman didn't hint which banks he's targeting, Bloomberg notes citing Markit data that Metro Bank and CYBG are the most shorted financials in the FTSE 350 Index.

Fast forward to today, when the famous short-seller told Bloomberg that he has widened his "Brexit short", i.e., bets against U.K. banks, adding one more bank to his short bucket.