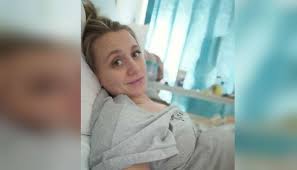 Thanks to a trailblazing new surgery being performed in European hospitals, Bethan Simpson's unborn daughter has been given a second chance at good health.

The 26-year-old mom recently became the fourth woman in the UK to undergo a procedure that treats an infant's spina bifida before they are even born.

Spina bifida is a birth defect that hinders a child's physical development, which generally results in paralysis and impaired motor function. If a fetus is diagnosed with the defect, doctors generally advise mothers to terminate the pregnancy.

Simpson and her husband were heartbroken to hear that their daughter had developed the condition – but then Simpson heard about a groundbreaking new surgery that treats spina bifida outside the womb.

Surgeons can treat the fetus by removing it from the womb, fixing the spinal cord, placing it back inside the womb and sewing the mother back up again.

The surgery was successfully completed for the first time in the UK at the Great Ormond Street Hospital back in October. Prior to its success, the procedure had only been performed in Belgium.

Simpson opted to undergo the surgery at 24-weeks-pregnant – and the mother-to-be from Essex is delighted to say that it was a success.