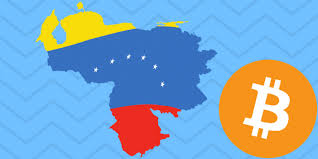 The influence of digital currencies across the globe has been massive since the inception of Bitcoin. The South American provinces have been some of the most active regions in terms of implementation and setting up regulations for the use of cryptocurrencies.

Venezuela, which has its own oil-backed cryptocurrency, has now been involved in a lot of incidents revolving Bitcoin. According to reports, cryptocurrency wallet platform AirTM and artist cryptograffiti, have taken the initiative to raise $1 million for the aid of Venezuelans through a legitimate Bitcoin installation.

Airdrop Venezuela, which is currently led by Steve H. Hanke, is trying to bring the cryptocurrencies for the native citizens of Venezuela from abroad so that it can use to exchange for local money, adding real-world usage to digital currencies.

Airdrop Venezuela, which is based out of the Columbian town of Cúcuta, is taking the assistance of the Bitcoin blockchain network to allow injection of financial aid for the betterment of Venezuelans economic status. The campaign is accepting donations in several cryptocurrencies and says that 100% of the donations received are sent to Venezuelan recipients.

The news has been followed up with the report that an impending US intervention is upon the South American subcontinent very soon as the US is in favor of opposition leader Juan Guaidó, who is trying to force President Nicolás Maduro out of power.

The citizens of Venezuela have turned against the President after Maduro refused to aid. He retaliated against the citizens by burning trucks on bridges and stranding convoys which were laden with resources for the mass on the Venezuelan borders of Colombia and Brazil.