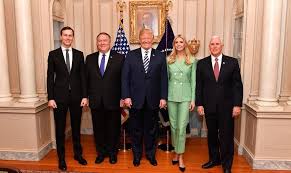 Hubris is when one develops an extreme and unreasonable feeling of confidence in a certain course of action that inevitably leads to one's downfall when that conceit proves to be based on false principles.

Pompeo was in Warsaw for a "summit" arranged by the US State Department in partnership with the Polish government to discuss with representatives of sixty nations what to do about the fractious situation in the Middle East. In advance, he promised that the meeting would "deliver really good outcomes." The gathering was initially conceived as a "war against Iran" precursor, intended to pull together a coalition against the Persians, but when it became clear that many of the potential participants would balk at such a designation, it assumed a broader agenda concerning "Peace and Security in the Middle East."

Iran, Iraq, Lebanon, Palestine and Syria were not, not surprisingly, invited as some of them were the expected targets of whatever remedial action the conference might recommend. Israel's Benjamin Netanyahu was, of course, present, tweeting in advance of the gathering that it would be all about "war against Iran." He also characteristically delivered a warning that Iran was planning a "second holocaust" for his country.