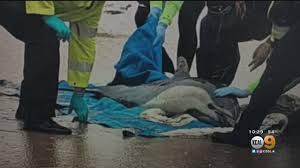 "It's a shock and not happy about it whatsoever," said Newport Beach resident Eric Fritz. "They're our friends, are you kidding? I've rode waves with dolphins before."

In the last two weeks, the Pacific Marine Mammal Center says five common dolphins and one bottlenose dolphin have washed ashore. Compare that to just one dolphin last year.

Scientists are desperate to find a cause.

"Anything from viruses to bacteria to toxins," said Krysta Higuchi of Pacific Marine Mammal Center.

It's not just dolphins – the number of California sea lion rescues has doubled.

Rescue teams suspect the culprit may be a harmful algae bloom reported off the coast of Newport Beach, fed by runoff from the recent rains.

"I saw how filthy the oceans were after the rain, it was was brown and red. I would not go in there," said Newport resident Noelle Reyna.

Residents say the ocean's condition is cause for concern.